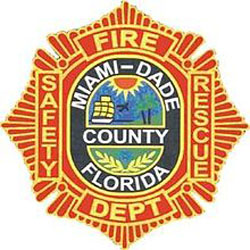 Miami-Dade Fire Rescue is among the ten largest fire and rescue departments in the United States. It serves a population of 1.9 million people throughout an area of 1,900 square miles with nearly 2,500 employees, 2,000 of which are uniformed firefighters. MDFR is the largest department accredited by the Commission on Fire Accreditation International. As a major in-kind sponsor of ProJecto, MDFR has donated thousands of dollars in protective gear and other firefighting equipment for redistribution to economically disadvantaged departments in the Dominican Republic, Haiti and Colombia.